Java is every where in browser, in mobile, in TV or in set-top boxes and if you are into Java programming language than you know that Java code which is bundled in JAR (Java archive) file require Java virtual machine JVM to execute it.

JDK is also loosely referred as JRE but its lot more than JRE and it provides all the tools and executable require to compile debug and execute Java Program.

basic architecture of the JVM 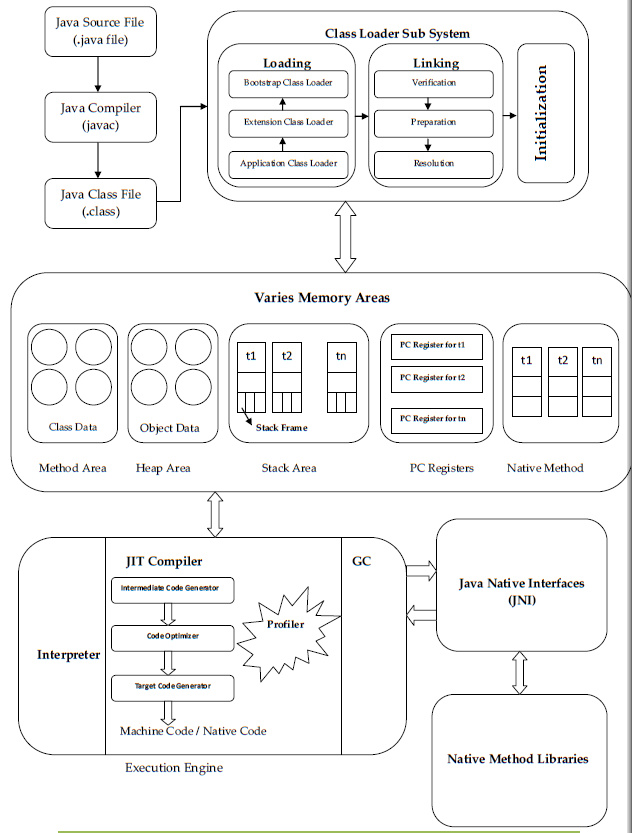 In Initialization activity, for class level static variables assigns original values and static blocks will be executed from top to bottom.

Heap space in Java is used for dynamic memory allocation for Java objects and JRE classes at the runtime. New objects are always created in heap space and the references to this objects are stored in stack memory.

These objects have global access and can be accessed from anywhere in the application.

This memory model is further broken into smaller parts called generations, these are:

Stack Memory in Java is used for static memory allocation and the execution of a thread. It contains primitive values that are specific to a method and references to objects that are in a heap, referred from the method.

Here also for every Thread a separate run time stack will be created. It contains all the native methods used in the application. Native method means methods written in a language other than the Java programming language. In other words, it is a stack used to execute C/C++ codes invoked through JNI (Java Native Interface). According to the language, a C stack or C++ stack is created.

It is responsible to read byte code and interpret into machine code (native code) and execute that machine code line by line.

JNI is acts as a bridge (Mediator) for java method calls and corresponding native libraries.